How can MOM ever be discovered in the future?

A buried treasure such as the MOM archive needs to be marked somehow in order to be retrievable in the future.

If we would find something comparable today, we would apply our modern technologies: scan it, process it and translate it. The same find would have challenged the people of the 18th century or even of the mid-20th century.

Therefore a future society should find MOM only when it has a level of knowledge which is at least similar to our current state.

For that reason, the “marker” simultaneously needs to be discreet and obvious: Meaningless or irritating for those with insufficient knowledge but information-dense for someone with adequate comprehension and technologies.

Uncountable identic small tokens made of strong ceramic undertake this task. People participating in MOM receive one and, in turn, this “treasure map” for the archive gets distributed all over the planet.

By means of landmarks (coast lines, the physical shape of a lake in Hallstatt, distances between mountains) the exact position of the MOM archive is displayed. 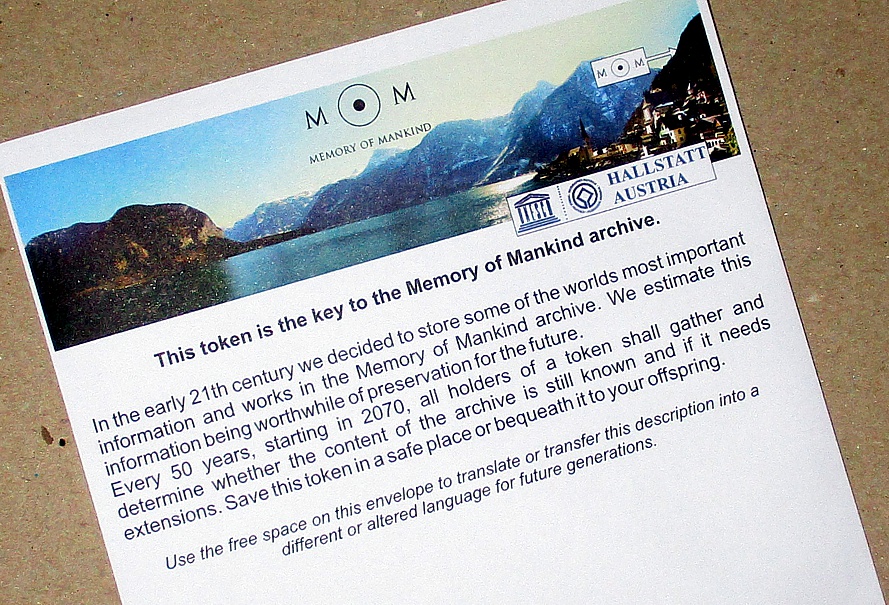 In order to understand the purpose and decode the token a particular knowledge is required:

Coastlines will alter by a change of sea level; the shape of the lake (Hallstätter See) looks different after an ice age or it could disappear completely.

A society in the future which decides to begin the search for MOM needs to be able to reconstruct a coastline according to a given sea level or the shape and position of the lake.

The two intersecting points of coast lines with longitude and altitude represent the coordinates of the entrance to the archive. Only a coordinate-grid measured by satellites is exact enough for these indications.

(in the 1970’s we started to measure the earth by satellites and since the 1990’s the accuracy has become sufficient enough.Before that the land-measuring by triangulation had a divergence of some 10 km between Hallstatt and the coast point in Norway)

3) Seismic devices which can detect the cubic form of the archive against the distinct properties of ceramic and the salt deposit.

4) Thermoluminescence needs to be known. This phenomenon facilitates to determine the age of silicate materials – or more precise: the time passed since the last heating over 600°C. This method is used by archaeologists and art-historians to figure out the age of ceramics.
The token is not only a treasure map but also a kind of clock (because it was fired at 1200°C to produce it). The age of the token will help future finders to reconstruct the coast-lines at a particular point in the past.

(thermoluminescence dating is known since the 1950’s)

There are several time capsule projects worldwide. They either denote a particular date to be opened again or the authors left it to chance whether they will be discovered at all.

In contrast to these time capsules the opening date of MOM is not pre-determined or depending upon an accidental discovery but it is strongly set by the design of the storage and the token.